Four weeks since that awful day Jason died. I feel like it’s still not true, that I’m waiting and waiting for him to come home.

This has been such a hard day. We never did make it to church. We started out, but turned around just down the road. Jenna was crying so hard. We came home and all three of us sat on the bed and cried. We just can’t operate as we normally did…do things as we used to…like nothing has happened. What an incredibly hard day.

Easter Sunday…four weeks to the day since the accident…and not one person calls or comes by! No cards. My sister was the only one who called us and left a message. Talk about feeling so very alone! I’m trying so hard not to let it bother me that next to no one is here for us right now. I’m so thankful for the MacFarlane’s invited us over for Easter dinner. I don’t know what we would have done if they hadn’t.

We went to Tulsa for Spring Break…the plan for this visit was set months ago. I guess it was good to be away. It was good to be with family. We looked at some houses there. Do we want to move? I don’t know…it’s so hard to make any decisions right now.

We came home to an empty house, though, and that is just so hard. Debra* called when we got back and said something about our phone is probably ringing off the hook. What?!? We have had two calls – a grand total of TWO calls – since we got back! Everyone must think someone else is calling and is here for us…but they’re not. Maybe they just don’t want to bother us or can’t handle being around people who grieve. Any way you look at it, it just leaves us alone. 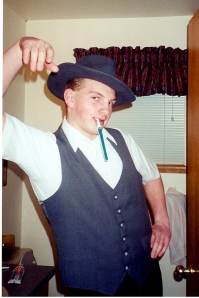 Tonight the house feels so empty…this big house that was filled with Jason, his laughter, his friends, fun, hanging out with his sister, just hanging out. It’s going to be empty – feel empty – until we move, I’m afraid. Jason just permeated every part of this house – from the studio where his weight set is…to the kitchen where he sat on the counter (one black-slippered foot up on the counter as he talked to me)…to the trampoline in the back yard where he would do flips…to the bathroom where his razor and toothbrush wait for him to return. He is in every corner. Everywhere is some memory accentuating his absence.