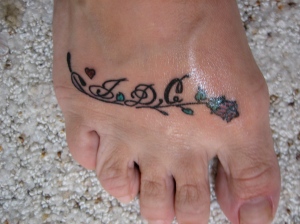 I have a tattoo on my foot. I’m sure it seems totally out of character for those who know me, for someone “my age” and conservative background. When I got it, it sure was a big surprise to people I knew at the time (including my husband!)!

It’s not a tattoo that I got when I was young or one I got spur of the moment on a whim. I went with my daughter after Jason died when she wanted to get a tattoo in memory of her brother, and I got one at the same time. We’d been talking about it off and on since Jason’s death, and I had in mind exactly what I wanted. It’s a tattoo of a red rose, a heart, and Jason’s initials. Jason loved to give roses to people he cared about, he had a huge loving heart, and it seemed very fitting.

Jason giving roses to his fellow “Our Town” actors

Very few people ask me about it, if they notice it at all. I did, however, have someone remark in surprise when she noticed it recently. She went on to ask questions about it, and I simply said it was in memory of our son. To her credit, she didn’t shy away, but asked me what happened and told me how sorry she was. I showed her a picture of Jason, and she told me her husband had passed away the year before. I appreciated her taking the time to ask and to talk to me about it.

However, she then kept adamantly insisting over and over that “they were in a better place,” that “God was in control and had a perfect plan,” that “all of this was part of God’s perfect will.” When I didn’t respond in agreement (as she obviously thought I would), she adamantly insisted the same things all over again. I’m sure she was well-meaning, but it just wasn’t something I really wanted to hear right then. With the anniversary of Jason’s death right around the corner, I felt like my emotions were very near the surface. I steered the conversation away to something else.

When is it appropriate to insist to a bereaved parent that it’s God’s perfect will that his or her child died?

Never. Never, ever, ever. I’m of the opinion that a person shouldn’t tell a bereaved parent that it was God’s perfect will that his or her child died, and I don’t think it’s ever okay to adamantly insist such a thing. Whatever a bereaved parent’s religious point of view or conviction of God’s part in the whole event may be, it’s probably better to say nothing along this line than to step on a bereaved parent’s toes. Believe me, a bereaved parent has enough to deal with! Unless one has walked in the other person’s exact same shoes – and, if you think about it, those shoes are “made for walking” by only one person because of each of our own unique situations and personalities – it’s better not to make any assumptions. One person doesn’t know where the other person is coming from or how such comments will be received or interpreted.

For me, personally, it’s never been a comfort to me for someone to tell that Jason’s death and the situation surrounding Jason’s death was God’s will – like Jason was supposed to die that day afer being broadsided by a drunk driver, that my family and I were supposed to have to walk this long road of grief, that we were supposed to be left alone by nearly everyone we knew, that we were supposed to learn to live a life without Jason, that it was absolutely God’s will for Jason to die as he did and when he did. Was it God’s perfect will for Jason to die that day? I don’t know, but I’ve always thought Jason had more things he was supposed to do here on earth during his lifetime. I can’t even begin to imagine Jason taking the brunt of a car going nearly 80 miles an hour. Was that God’s will? Jason was one of the “good guys” – kind, intelligent, funny, compassionate, Godly, on and on. It’s hard for me to think about Jason’s death on that awful day in terms of God’s perfect will. 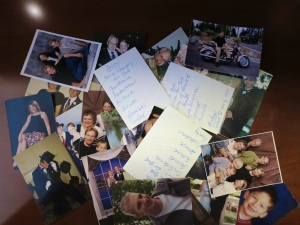 One year, I wrote on the back of wallet-sized photos exactly what I was praying for my kids. I prayed for my kids. I prayed for their friends. I prayed for my family. I carried those photos with me wherever I went as a reminder to pray for my kids; I still carry them with me to this day. I believed 100% that God heard my prayer and that he would protect my kids. I believed that God heard my prayers and that they “availed much.” I believed 100% that God had a wonderful plan for Jason’s life, that he had a wonderful spouse for him, that my husband and I would enjoy watching Jason marry and have children. But it didn’t happen that way. Jason died at the age of 19 after being hit by a drunk driver. I guess I’ve been trying to reconcile what I thought I knew about God and my new reality ever since then.

12 For now we are looking in a mirror that gives only a dim (blurred) reflection [of reality as in a riddle or enigma], but then [when perfection comes] we shall see in reality and face to face! Now I know in part (imperfectly), but then I shall know and understand fully and clearly, even in the same manner as I have been fully and clearly known and understood [by God]. I Corinthians 13:12 (http://www.biblegateway.com/verse/en/1%20Corinthians%2013:12)

I know people are well-meaning. I know they don’t know what to say. It’s easier to think that bereaved parents who believe in God should just accept that it God’s will for their child to die than to question why a child died and why God didn’t protect that child. It’s easier to think that bereaved parents who believe in God should respond as Horatio G. Spafford, the author of the hymn “It is Well With My Soul,” following the death of his children. (Sometimes it feels like the Horatio Spafford model is what is expected of bereaved parents, and that we are supposed to have no or little grief or soldier bravely on by singing that “all is well” with us in spite of the fact that our child died.) It’s easier to think that there is a greater purpose when a tragedy strikes than to recognize that it’s really hard work to integrate the loss of a child into life. After Jason died, I looked and looked and prayed and prayed for a greater purpose and that his life and death would be for nothing.

I just don’t have a lot of answers any more, but I don’t think I will ever be convinced that it was God’s perfect will that Jason die on that day. I don’t know why Jason died on that day; I just know that he died and I miss him so much.