As I mentioned before, I have been working on a memory quilt. I have been using pieces of fabric from clothes my grandmother, mother, daughter, sister and I have sewn over the years, supplementing  with pieces of new fabric depicting something that creates a memory for me. I still haven’t gotten up the courage to cut the shirts I saved that belonged to Jason. 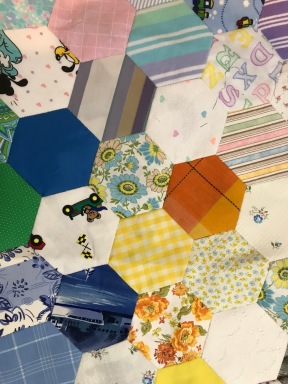 The local fabric shops haven’t had much of what I have been looking for, so I have had to resort to ordering online – etsy, fabric.com, eBay, etc. Of course, it ends up being much more expensive than walking into a local fabric store to make a purchase because shipping costs really add up on top of the cost of the fabric. Also, I take the chance of the item not being the quality I would want or the size I need to fit into my quilt pieces or whatever.

I ordered several pieces from a few vendors on etsy, after spending a great deal of time looking and looking. Each package comes with tracking, so I can see when they are delivered. Two packages showed they were delivered to our mailbox on Saturday, March 17th, at 1:09 p.m., but they simply weren’t there. They never showed up. I asked our neighbor if he got them by accident, and he had not.

My husband went to the post office with the tracking numbers on Monday, and the postmistress (after looking up the tracking numbers in their GPS system) said they were delivered to and left in the mailbox of an entirely different address nowhere near us!!! They flat out gave them to the wrong people.

She asked the driver and, of course, he didn’t remember anything about them and they weren’t in his truck. She drove out the the address and couldn’t find them in any mailbox or locate anyone to ask if they had received them. When I called to ask her on Tuesday about the packages, she said that people usually realize they have something that doesn’t belong to them and bring them back in. She suggested we just wait a couple weeks to see if they show up.

I called her again on Friday to find out the status of my packages. She said that on Thursday they had put notices in the mailboxes of any address that was similar enough to ours that could have received the package, asking them to return them to the post office if they had them. So far, they still haven’t shown up.

This is just so frustrating to me. Besides the absolute incompetence of the post office delivering my items to someone else and some person having the audacity to keep what doesn’t belong to them, I feel like I have such an emotional investment into making this quilt that it’s hard not to react emotionally. It just makes me want to cry or yell at someone or something. Don’t they know how important this is to me? No, of course they don’t, and they really couldn’t care less.

The vendors did not ship the packages with insurance, so I have no recourse for them to replace the items. They shouldn’t have to replace something and be out of pocket because the post office lost their shipments. I shouldn’t have to put out more money to replace them because of the incompetence of the post office. If they don’t show up this week, I’m going to contact the U.S. Postal Inspector and file a report with them.

Still no lost packages found and delivered by the post office. I stopped by today to talk to the postmistress. She said she has done everything she could do. I asked if I could file a claim with the post office to get the money back I had spent for the items they had lost. She said that, unfortunately, if the shipping vendor didn’t think the contents were worth insuring (which neither of them had sent with insurance), then the post office doesn’t consider them of any value and will not pay for the lost items.

Perhaps it’s time to switch gears for a while and start collecting fabric for the butterfly quilt I’ve been thinking about. I’m open to suggestions on where to get some fabric that won’t cost me an arm and a leg!!