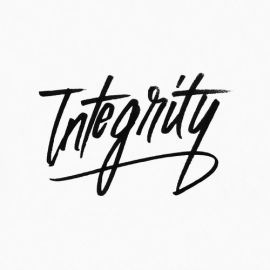 Official definition: Firm adherence to a code of especially moral or artistic values.

Synonyms: character, decency, goodness, honesty, morality, probity, recited, righteousness, rightness, uprightness, virtue, virtuousness. Honesty, honor, integrity and probity mean uprightness of character or action. Honesty implies a refusal to lie, steal, or deceive in any way. Honor suggests an active or anxious regard for the standards of one’s profession, calling, or position. Integrity implies trustworthiness and incorruptibility to a degree that one is incapable of being false to a trust, responsibility, or pledge. Probity implies tried and proven honesty or integrity.

Unofficial definition: Doing the right thing even when no one is watching.

Jason had great integrity, a heart to do what was right. He was honest. He was trustworthy. He was the guy that parents knew they could trust their daughters to go out with. He was the type of guy that showed up to work on time and did the best job he could, no matter what else was going on around him or whether anyone was watching. He was the guy that was kind to anyone.

In one of his college classes, a fellow small group project member had plagiarized a portion of Jason’s paper, one that Jason had generously consented to allowing the guy to read in order to help encourage this person’s effort in writing his own paper. The professor recognized enough similarities and called both of them in for cheating. Jason was horrified that his integrity was being called into question when he had simply been trying to help the other guy succeed in the class. Thankfully, the professor recognized what was going on and who was the real cheater. Jason’s integrity showed through.

My husband also has a great integrity. It’s one of the things that drew me to him. Joe worked in telecommunications, with his clients being some of the major hotels and universities in the greater Seattle area. He worked with the White House communications department, the office of the President of South Korea, actors, sports stars, major business companies. When working with government departments, he had to be cleared by the FBI just to step foot on any floor of the hotel the government entity had taken over. The thing about Joe is that he treated everyone with respect, whether his dealings involved the White House or the maid cleaning the toilet.

Jason was the same. He approached life with an openness, honesty and integrity that was just amazing. He was a true friend to his friends. He loved his family and friends unconditionally, forgave unconditionally. He was not embarrassed to show that he cared. He hugged those he loved, no matter who was watching. He was true to himself and his values. Whatever he did, he did with his whole heart and with integrity.

Integrity is treating people with respect, whether they are rich or poor, whether or not you personally benefit from the way you treat that person, whether or not anyone is watching or will every know what you did. Integrity is your actions matching up with what you profess to believe on Sunday. Integrity is not trying to make someone look bad just so you will look better. Integrity is owning up to your mistakes, genuinely saying you’re sorry, and trying to do better the next time.

Jason’s integrity is one of the things I miss about him. It is what inspires me to try harder and to do the best I can, no matter the circumstances.

I miss you, my precious boy.